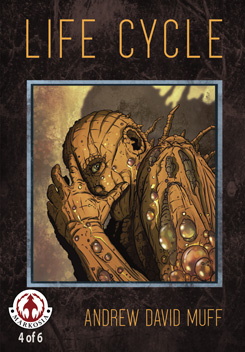 The divide between the infected and the uninfected widens, splitting Outpost 151 into two hostile factions. Melissa undertakes drastic measures to prevent further contagion, forcing Vaughn into a tense—and potentially violent—confrontation.

You can hire him, but you can’t buy him.

Except now in Death Hawk: The Complete Saga, which collects all of the classic comic stories about the 24th century salvage expert and his protosymbiotic partner, Cyke. This volume also features the brand-new, never-before printed final chapter of the saga!

Death Hawk and the beautiful but treacherous con-artist, Brigid O’Shaugnessy/Vanessa Bouvier find themselves unwilling allies as they engage in a star-spanning quest to discover the secrets of the ancient race known as the Skril and the only surviving relic of their culture – the mysterious Soulworm!

Along the way, they contend with hired killers, super-samurai, bloodthirsty chicken men and a whole planet of people genetically engineered to be perfect–as well as homicidal!

In the year 2086 humanity faces a new threat, Extra Humans. The government is struggling to cope with the growing number of mutants, aliens and supernatural beings who are living amongst us. People are beginning to panic and so, in 2050, the Department for Extra Human Affairs was established with a remit to try and contain the problem. By 2086 the situation has escalated, so they have formed a new rapid response strike force, the Alpha Gods. Who better to police the Extra Human community than Extra Humans themselves?

This group of young misfits and rebels must learn to work together despite facing conflict from within and from without. How can they follow a leader they have no faith in? How can they fight people they used to count as allies?

Their first mission sees them taking on an ancient evil, Malak. He is a Nephilim, an ancient race that was spawned when fallen angels mated with human women. He’s seeking a way to bring his “fathers” through to our world, and only the Alpha Gods stand in his way.

Alpha Gods: Omnibus is out now and available to order from the links below!

Jack Jones is a man with serious issues.

Abused as a child, Jack is now a disillusioned lawyer losing faith in the criminal justice system.

With his grandmother’s death, Jack’s childhood memories resurface, forcing him to confront his anger at what he suffered.

With his insider’s perspective on criminal justice, Jack sees that too many are getting away with their crimes. So he decides to take matters into his own hands. After all, with a rare genetic gift that prevents him feeling pain, he’s the right man for the job. So he’ll suit up… he’ll punish the guilty the way they ought to be punished.

But Jack will soon find out that taking the law into his own hands has unforeseen consequences.

Written by M.W. Leeming, the brand new novel, Justice Is Served, is out now and available to order from the links below!

Vaughn’s struggle to counter his patients’ worst impulses is put to the test when Lyndsey asks him to amputate her infected leg…and makes it clear that if he refuses, she’ll use the buggy medical android “Frankie” in his place. 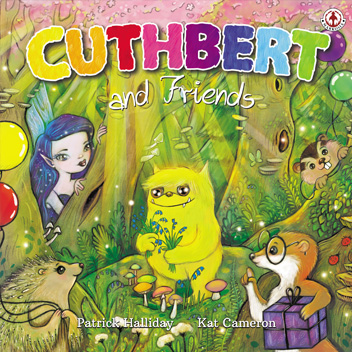 Cuthbert has been sent a secret note.

But who sent it? And why?

Find out by joining Cuthbert and his friends for another colourful adventure!

The Cuthbert series of books are fun, exciting and educational, with subtle messages about tolerance and diversity.

Written by Patrick Halliday and illustrated by Kat Cameron, click HERE to download Cuthbert And Friends on DriveThruComics now! 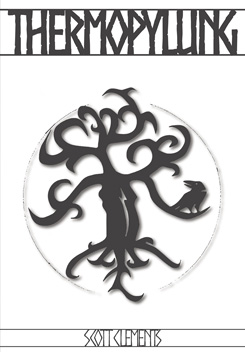 For millennia beyond counting the argument has raged: whose mount is swiftest? For Odin OneEye, All Father and Eternal King of golden Asgard, there has ever been but one answer: his seven-legged steed, Slepnir! Thor Thunderer, Prince of Asgard and strongest of all who live, has other ideas. His mount is a golden chariot, and it is not pulled by anything so mundane as a seven-legged horse. Rather, it is drawn by what Thor believes to be the swiftest beasts in all creation: his twin goats, Teethgnasher and Teethgrinder! Now, at last, the time has come to settle the dispute. A race, to decide once and for all time, whose mount truly is the swiftest! But when your mount can easily outpace the rays of the sun, no normal, namby-pamby track will do. No, you must race to the end of the greatest track of all: the Universe itself!

But what if the Universe has no end…?

If you are two of that Universe’s mightiest gods, you make your own! And if the universe doesn’t like it…?

Enter seven-year-old Preston T. Thermopoly, and his tiny, immortal friend, Glimwir Starsong of the Wyrd. Together this unlikely duo will journey across the Nine Worlds of the Universe, making friends, and battling gods, all in an effort to stop the race that could spell the end of everything…

Written by Scott Clements, this new novel, Thermopylung, is out now and available to order from the links below! 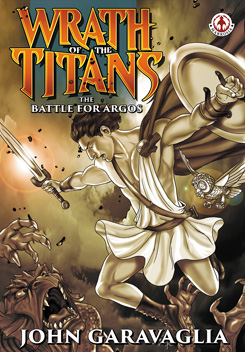 Argos has been at peace for five years. Perseus has defeated the gorgon Medusa and slain the Kraken, assuming the throne. His people celebrate as he and his wife, Queen Andromeda, expect their first born.

But not everyone rejoices for the royal couple.

Tragedy strikes when Perseus returns home to discover his newborn son has been kidnapped! Aided with his new companions, Perseus leads a search for whoever is responsible, unaware there are other forces at work.

Written by John Garavaglia, this new novel, Wrath Of The Titans, is out now and available to order from the links below!

While Ben continues to transform into a crumbling, oozing monstrosity, his co-workers’ apprehension about his presence on the outpost surges into a full-blown panic when the same rash appears on another victim. 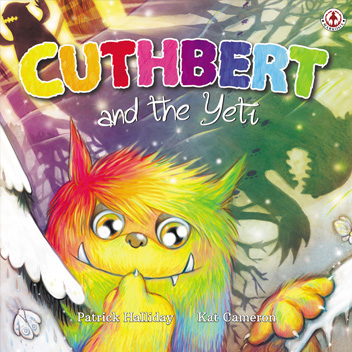 Cuthbert And The Yeti

It is winter in the Enchanted Forest and all is still and quiet.

Quiet, that is, apart from a loud ROAR that startles Cuthbert from his sleep.

What can it be?

Find out as you join Cuthbert in his latest colourful adventure!

The Cuthbert series of books are fun, exciting and educational, with subtle messages about tolerance and diversity.

Written by Patrick Halliday and illustrated by Kat Cameron, click HERE to download Cuthbert And The Yeti on DriveThruComics now!