Markosia Spotlight On: Tales from the Clockwork Empire 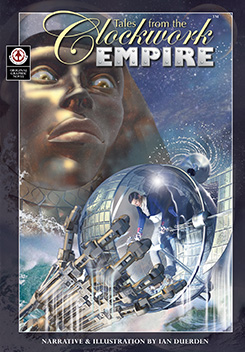 Each week we’ll be turning the spotlight on one of the many quality graphic novels from our extensive back catalogue.

This week it’s the turn of Tales from the Clockwork Empire.

Two mighty Clockwork Empires are fighting for domination of the planet. Beneath the waves of the English Channel armadas of clockwork submersibles are massing for invasion, while above Imperial Russia’s newly invented AirKites fight for supremacy of the skies. But in their search for more ingenious and deadly devices these empires have awoken an ancient Clockwork Civilization… A clock, stilled 3000 years ago, has begun ticking again… This is the Age of the Clockwork Empires and in 1803 this is how it began…

Written and illustrated by Ian Duerden, click the links below to order or download Tales from the Clockwork Empire now!