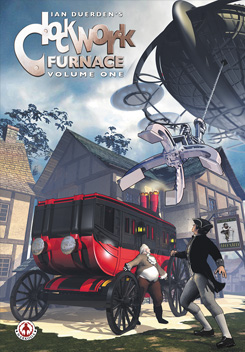 It is 1784 in the Age of Enlightenment and these are the chronicles of the Society of Incredible Exploits.

In the small hamlet of Grimsthorpe, ancient and deadly forces are being released. Squire Sebastian Flint, a supporter of the newly discovered power of steam, and his brother Lord Lucien Flint, a champion of clockwork mechanisms, must solve the mystery of the Devil’s Bell, the myth of the Immortal Peddler and uncover a dark sercret that has lain dormant for a thousand years in the heart of Deepdale Wood.

The prize…a device of inexhaustible energy.

The peril…the very unravelling of reality itself.

Written and illustrated by Ian Duerden, Clockwork Furnace is out now and available to order from the links below!