King Kong of Skull Island: The Wall – OUT NOW! 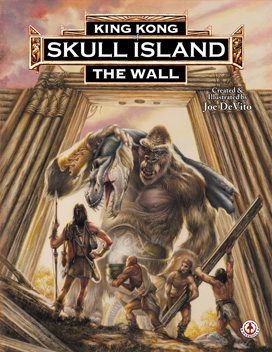 Millennia before the Golden Ages of Egypt and Greece, a uniquely marvellous race of humans existed on the shores of what today is a portion of the northern rim of the Indian Ocean, on the northeast side of the Andaman Sea. They called themselves the Tagatu. They could have–perhaps would have–ruled the world. And then they vanished.

Their former greatness and their relationship to the giant species of anthropoids known as the Kongs are only hinted at in a colossal Wall that still spans the peninsula of Skull Island. How did the Tagatu come to live on that prehistoric island, and how could they have built such a Wall in the midst of so many terrifyingly powerful dinosaurs?

I am Dr. Vincent Denham. My father, the famed entrepreneur Carl Denham, was the first modern man to ever set foot on Skull Island and view that Wall up close with his own eyes and survive to tell the tale. This is our story.

KING KONG of SKULL ISLAND Part 2: THE WALL is the spectacular conclusion to Skull Island: Exodus. The war for species survival against the island’s indigenous forward evolved saurian denizens, the Deathrunners, and their monstrous queen, Gaw, threaten to wipe out the Tagatu and the Kong invaders. The inevitable , penultimate battle for survival between humans, Kongs and super-saurians takes place against the riotous prehistoric backdrop of Skull Island.

The Tagatu civilisation’s only hope for survival is the building of the iconic Wall: A massive barrier determined to defy both the island’s denizens and the arc of time itself. Spanning the millennia, the Wall will come to play a pivotal role not only in the fate of the Tagatu people, but also in the rise and fall of the mythic monarch of Skull Island, King Kong!

“Whether it’s Wonder Woman, Doc Savage, Tarzan, or Superman, Joe DeVito is an expert at bringing larger-than-life, mythic characters to life. Now he’s focused all of his imagination, skills, and passion to excite a new generation with the secret history of The Eighth Wonder of the World. KING KONG of SKULL ISLAND is a beautifully illustrated, riveting adventure that would have made Ann Darrow swoon and Carl Denham envious.”
– Arnie Fenner, Co-founder of Spectrum: The Best in Contemporary Fantastic Art

Written by Joe DeVito & Brad Strickland and illustrated by Joe DeVito, King Kong of Skull Island: The Wall is out now and available to order from the links below!