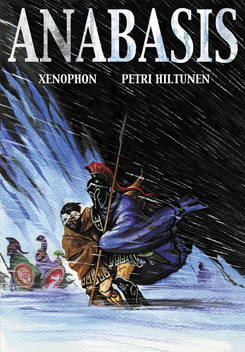 In 401 B.C. Xenophon, disciple of Socrates, accepts a friend’s invitation to participate as an observer with a group of Greek mercenaries hired by a prince of Persia called Cyrus the Younger. He gathers a mighty army and launches a campaign against the Pisidians.

This sets in motion the vicious cycle of lies and bloodshed, which revolutionises the life of a young man, and affects the entire span of world history!

Cyrus has a secret plan to strike against his brother Artaxerxes, and seize the throne of Persia. Xenophon and twelve thousand cheated Greek mercenaries find themselves stuck in the middle of the world’s largest empire, betrayed, outnumbered and besieged.

The king gives them two options; surrender unconditionally and face a life of slavery or die.

They decide to take the third option and fight their way home!

Writer & illustrator: Petri Hiltunen, adapted from the book by Xenophon