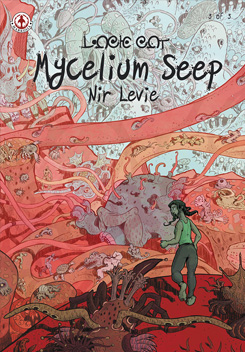 Khalek is a teenage boy who lives in an underground city, the denizens of which manufacture their food from roots that penetrate downwards from above ground. When he discovers a disease inflicting their main food source a series of events leads to the merging of his mind with that of Laura – a vehicle designer from present day earth.
The population in Khalek’s world are barred from visiting the planet’s surface, which is controlled by a xenophobic race of humanoids. The humanoids communicate amongst themselves non-verbally and are constantly moving from place to place, using their legs as their only means of transportation.

Khalek and Laura’s newly merged consciousness embarks on a journey to understand the interrelation of their respective worlds during which they find themselves attempting to communicate with the humanoids in order to stop the disease decimating Khalek’s world.

Mycelium Seep is a science fiction story that deals with questions arising from the implementation of new technology – Is it possible to curb the rise of technology when it seems to lead down a dangerous path? A critical stance is taken regarding transportation, focusing on personal motorized vehicles.