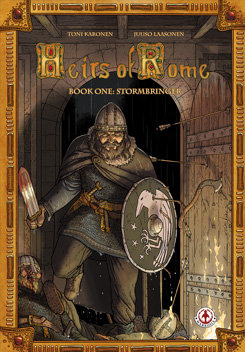 Germania Inferior, province of Rome. Spring 431 AD. As the great migrations ravage the borders of the crumbling Roman Empire, King Chlodio ‘Long-Hair’ of the Franks seizes the opportunity to invade Gaul.

The infamous warlord, Bor ‘The Invincible’, follows his king faithfully into battle, dragging his son along in his wake.

Fifty years later the son of Bor would become known as Count Rocco, ‘Raven Of The North’. The man who united the Frankish kingdoms, taking a collection of shivering fingers and moulding them into a fist of iron.

Before all of this would come to pass, he was simply a boy blinded by vengeance, preparing to take his first step on a path from which there would be no return…