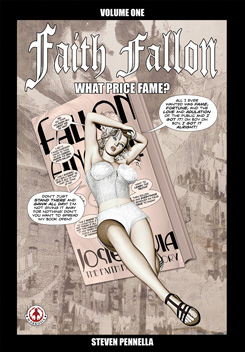 Who is Faith Fallon?

Faith Fallon was America’s sweetheart during the fabulous 50s. She burst onto the Hollywood scene like a shooting star. Men wanted her. Women wanted to be her. Alas, as is the fate of so many young starlets in Hollywood, her star eventually faded, and she fell out of favour.

Faith’s career and personal life continued on its downward spiral until she was found dead in her home in upstate New York. She had allegedly committed suicide.

Faith Fallon suffered a fate worse, and in some ways better, than death. This is her story.

From famous to infamous.

“From the moment you open the first page you know you’re in for something special, it’s forward thinking and ulitisation of mixed media show you the future of storytelling.”
Steven Leitman
Reading with a Flight Ring